May, 2014
It’s been such a long time since I wrote a journal entry I hardly know where to start.
Amelia’s recovery from her surgery last September was long and tedious and not at all like her usual style of “bounce back and keep on going“.  Since the stints had to be removed from her nose to stop the bleeding there is not much of a change to the shape of her nose, but her lower eyelid is not as droopy and her lip healed well.  The real problem post surgery was that her hearing was really affected.  Nobody seemed to be able to tell us why that should be, perhaps there was some swelling in her brain stem? 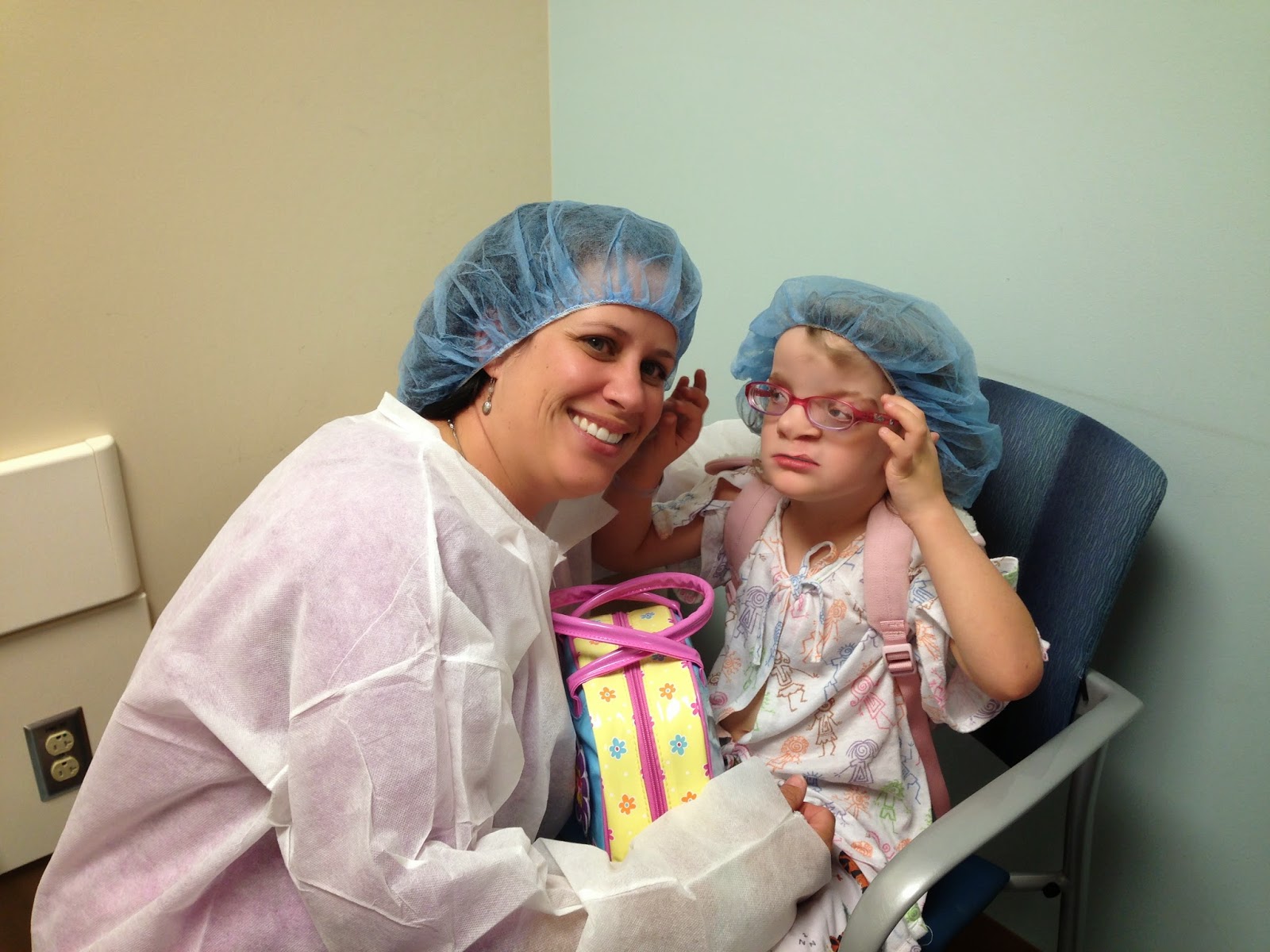 We were so glad to be able to communicate with her in sign language during that period of time and eventually her hearing returned and she regained the progress she had lost.   She also had a number of colds and little illnesses that kept her out of school quite often, but she enjoys her preschool class in the DHH (Deaf and Hard of Hearing) program and is making good progress.  She gets picked up by a small school bus at 7:20 am and returns home at about 11:45am.  Two long bus rides for a relatively short school day, but Amelia takes is in stride even when the bus breaks down and the driver does not know sign language!  She is the only child on this bus route and often there are scheduling mishaps and she is kept waiting.  In October she received a special award for being the class “Vocabulary Superstar” for her sign language skills.  We are not sure if she really understood what it was, but she stood proudly on stage and posed for the camera.  And of course a party in the classroom is always a treat for any reason. 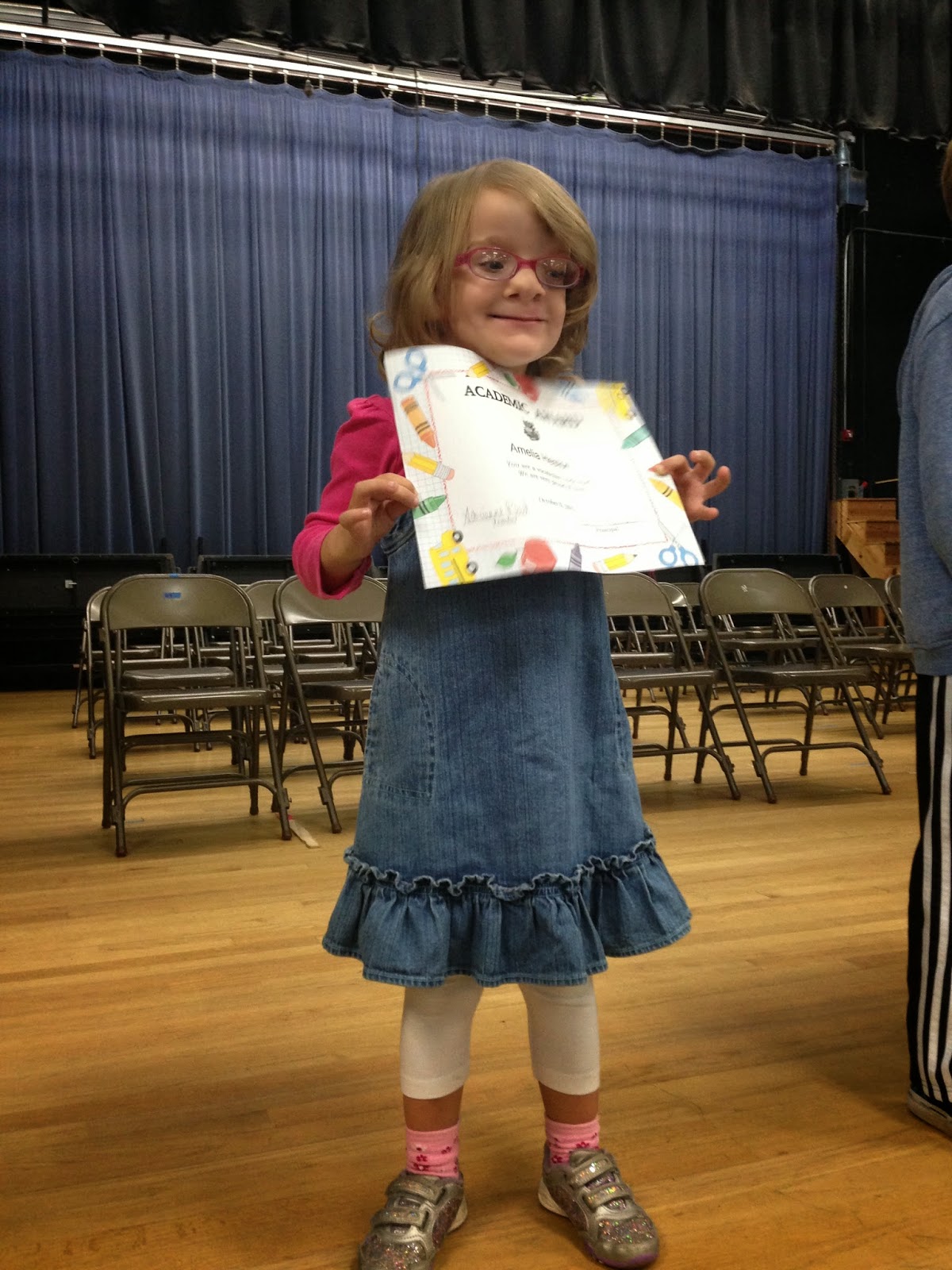 In December Amelia started Horseback Riding Therapy and does she love it!  She is very tired of all her other therapies and would rather not go, but on Wednesdays she is raring to go and can hardly wait.  She rides at a very special place called “Reins” out in farm country and I feel so privileged to take her there every week and be able to observe the work that the dedicated staff do with so many special needs children and horses.  When we turn into the road leading to the farm, it’s like entering another world.  Large pastures with white fences and horses everywhere, big trees, lovely trails, stables, and outbuildings to house the offices and all the equipment they need.  Amelia quickly learned the routine and knows where to find her helmet and visor and to make sure her horse is waiting in it’s stall.  She rides a fat little Icelandic pony named Kvika, the cutest little horse ever.  There are special ramps for the children to mount their horses and then a team of tree people stay with them while they ride either on the trails or in the arena.  They work on her balance by letting her lean from the horse to place and retrieve objects or by letting her ride backwards and side saddle.  She is also learning to control the reins to tell Kvika to “Go” or “Whoa”.  Her favorite part is when they allow her to trott for short distances.  Amelia also loves it when she dismounts and gets to find a bucket and some carrots to say thank you to her horse.  Hanging up her tackle is also very exciting for her. 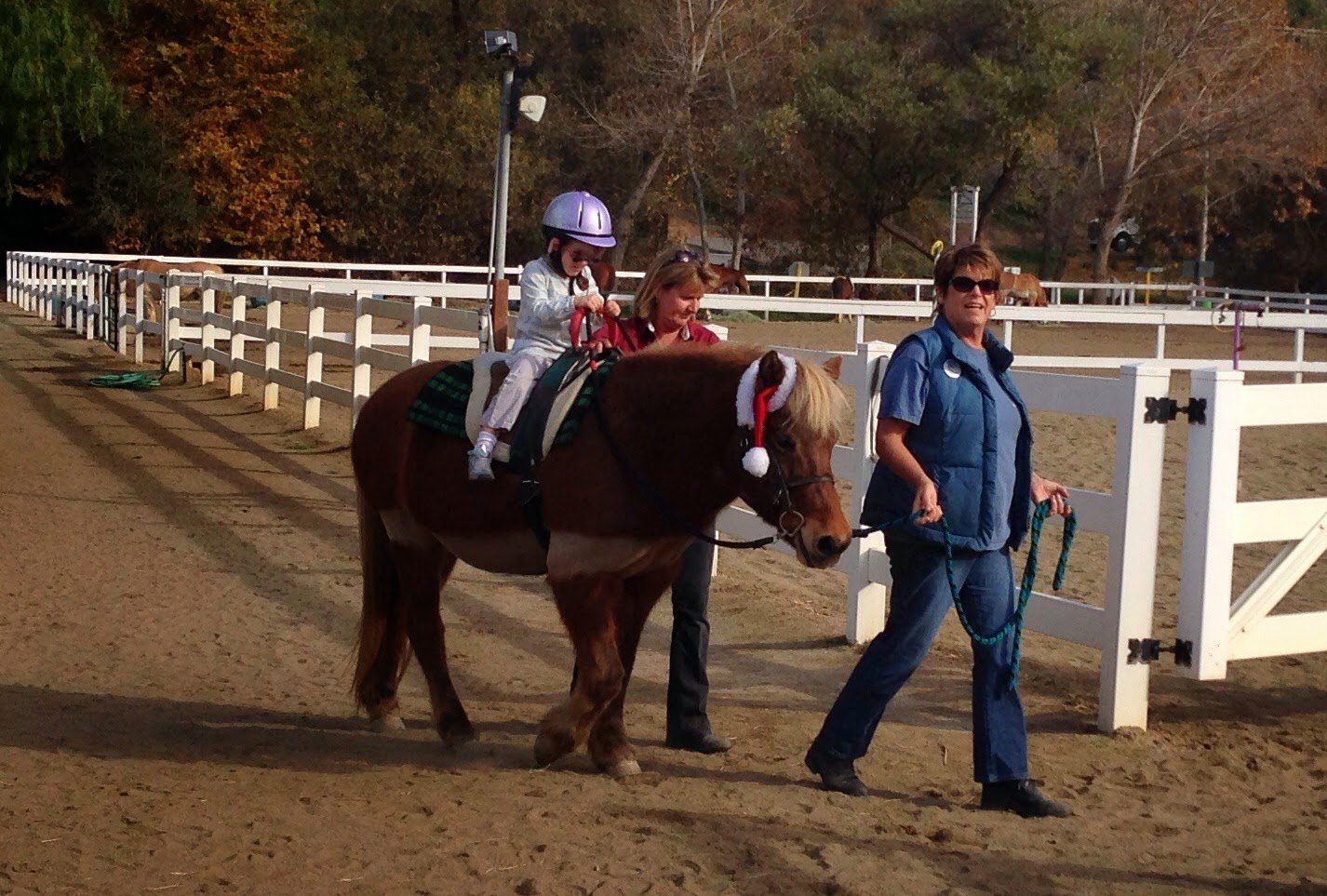 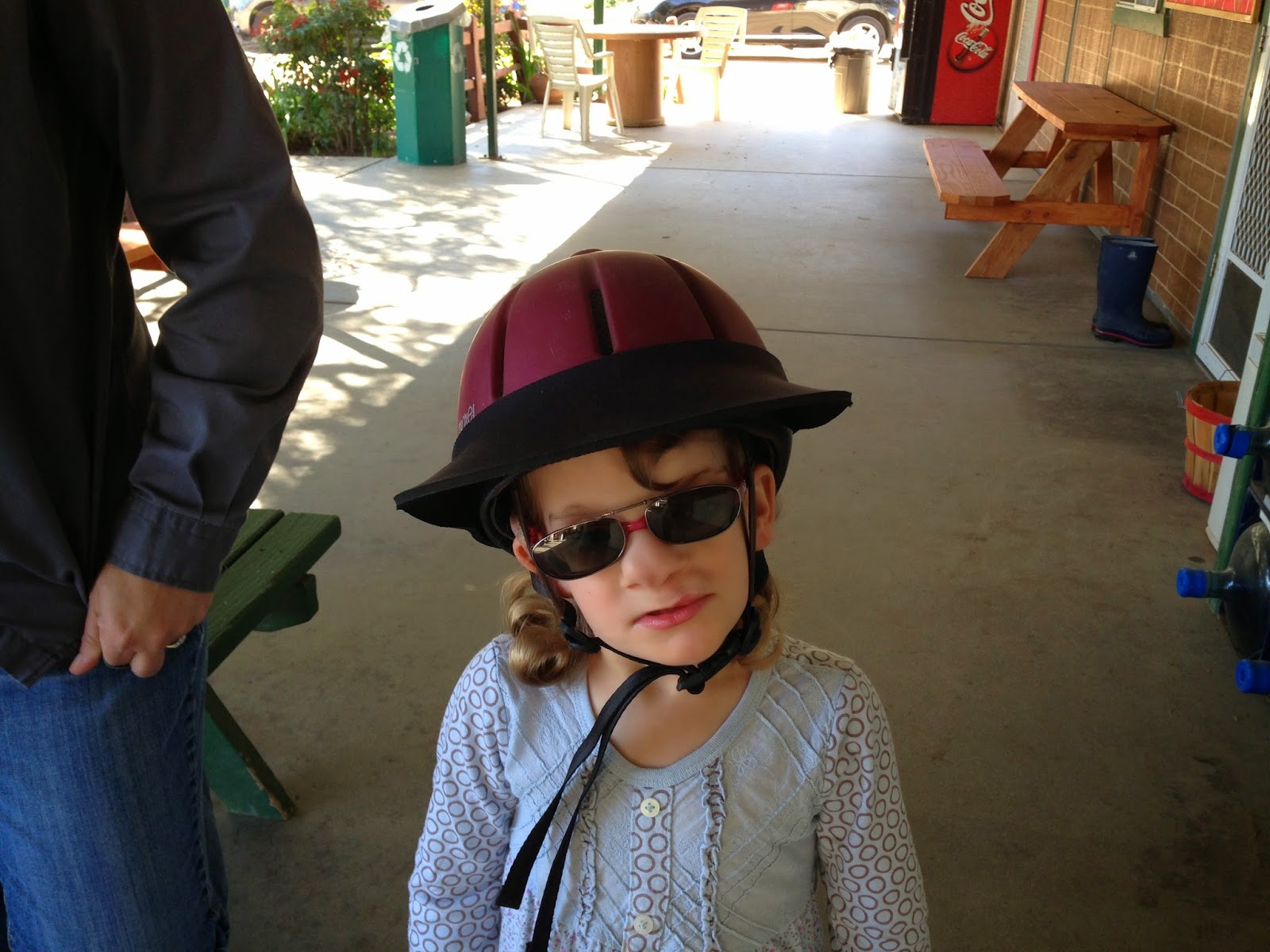 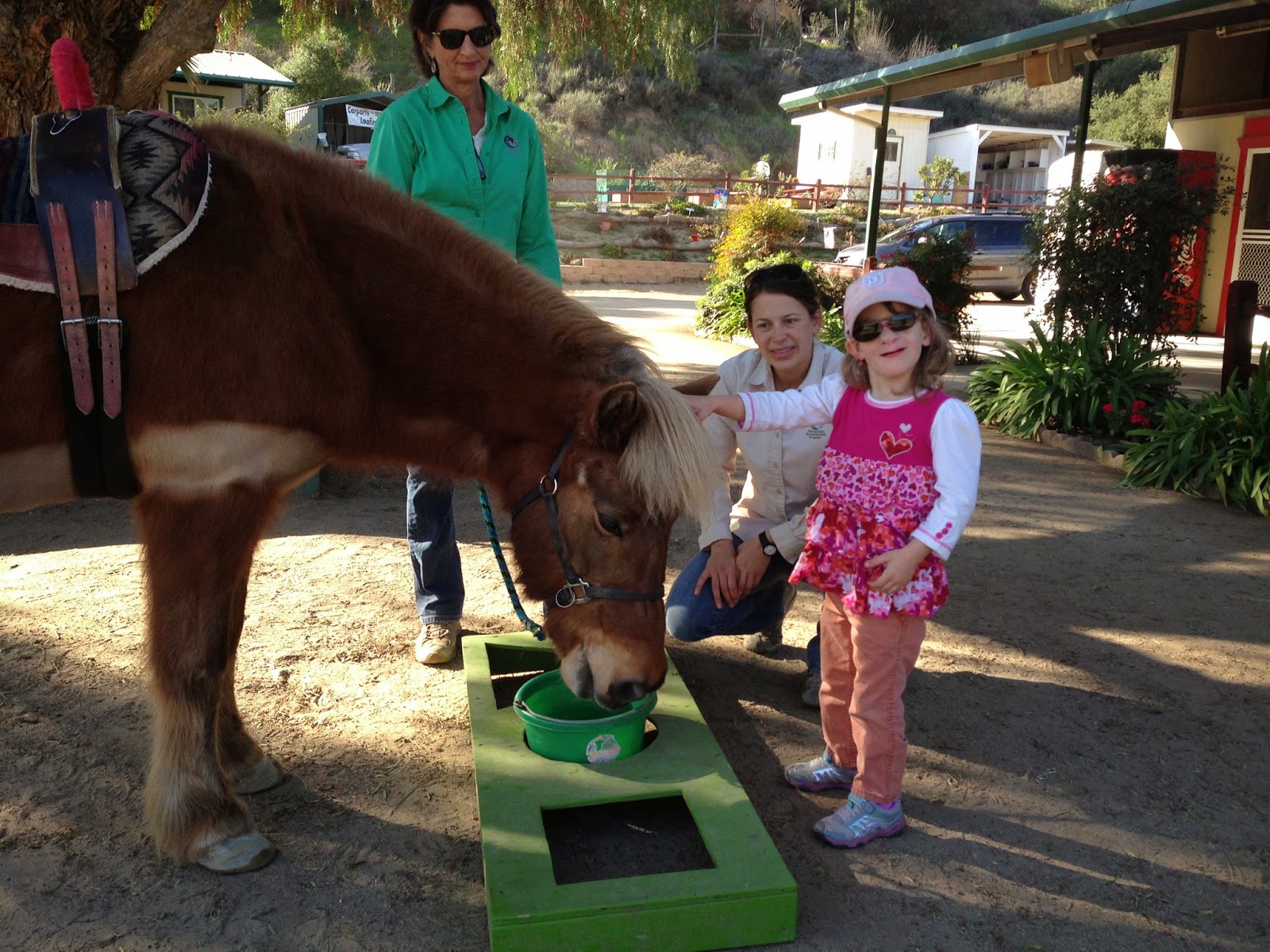 We can see some improvement in Amelia’s balance and she is now willing to ride a little scooter with three small wheels.  She still likes her tricycle better and whizzes around on it confidently.  Her dad got a co-pilot attachment for his bike which allows Amelia to ride a child’s bike right behind him.  She really loves that and said she was done with the trailer she usually has to sit in on family bike rides.  It’s so important to her to always feel like a “big girl” and do as many things as she can independently.  She wants to buckle her own seat belt in the car (and the school bus!), dress herself, unlock and open all doors, carry everyone’s backpacks, purses and keys, make the beds, and carry dishes to the sink.  She’s really fast and we constantly have to be on the look-out for potential mishaps in her efforts to beat us to the next task. 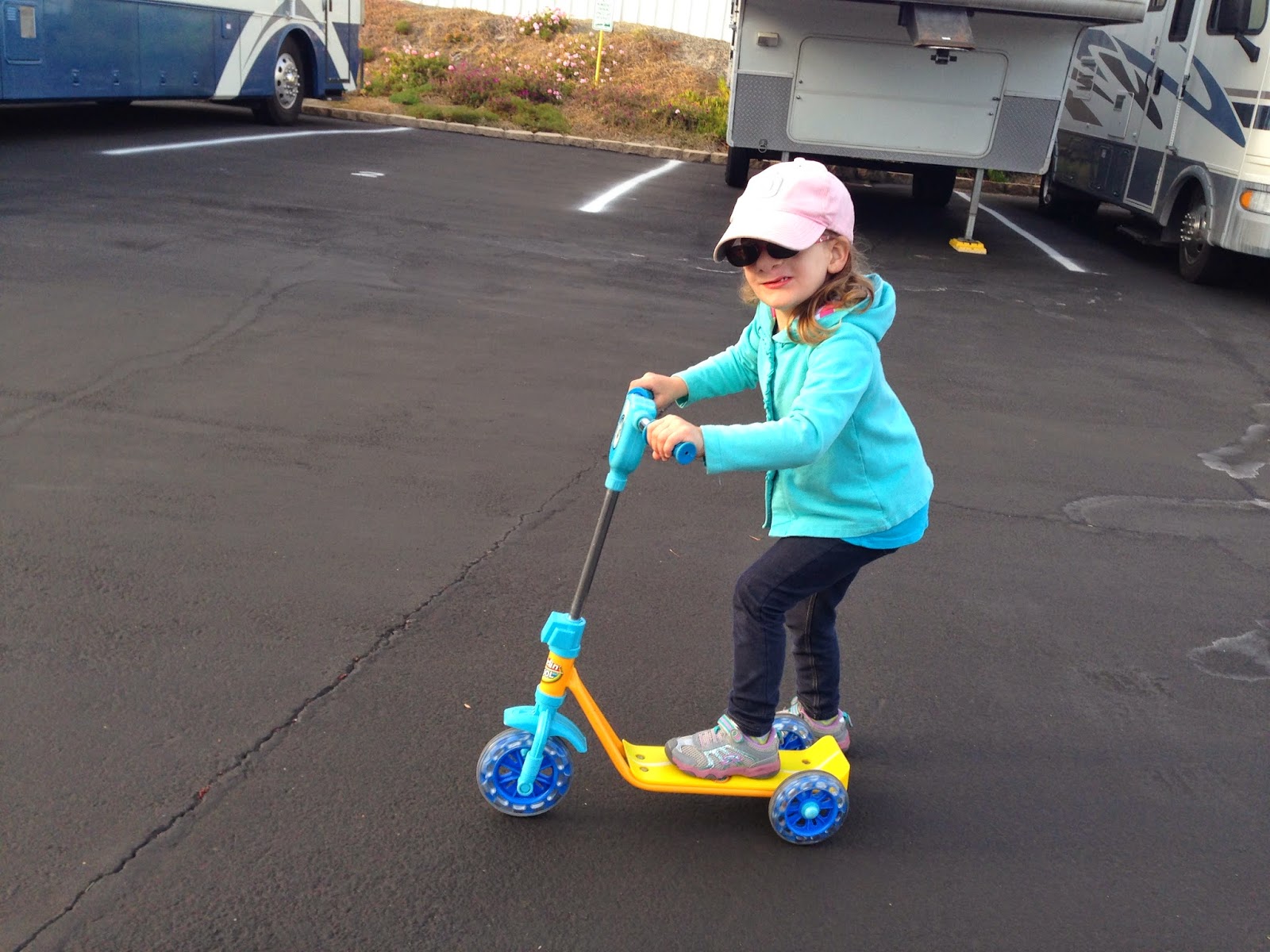 We can practically see her busy little brain at work in trying to figure out the world around her and she amazes us with her reasoning and inventiveness.  She notices everything and comments on it.  It takes us forever to go for a walk, because she wants to talk about things all the time.  And since she can’t walk and sign at the same time, we have to make lots of stops.   We recently had a big discussion about bees.  She really did not believe what I told her about bees making honey and so we spent a few hours at the home of  some friends who keep bees and they graciously allowed her to observe the whole process.  She also got to pick juicy oranges off a tree that day which was another lesson learned.

A by-product of  making Amelia independent is that she really wants to make her own decisions!  She will decide what to wear, what to eat, what to play, where to walk and which book to read.  If we suggest she wear the red shirt, she will most certainly choose the yellow one and it’s a battle to get her to wear shoes when she really wants to wear her flip-flops!  Everything has to be negotiated:  pigtails vs. ponytail, sunhat vs. baseball cap, jacket vs. sweater and on and on.  If you give in too easily she changes her mind, just to keep things interesting!  Very occasionally she arranges for a compromise as in the case of her latest lunch craze.  She has been wanting to eat a “dippy egg” for lunch every day for weeks and one day I decided that we were having a sandwich instead.  We did a couple of rounds with me signing sandwich and Amelia signing egg.  Her signs were getting bigger and more emphatic when she finally stopped and looked at me slyly.  She then signed “egg sandwich”.  And that’s what we had for lunch, of course. 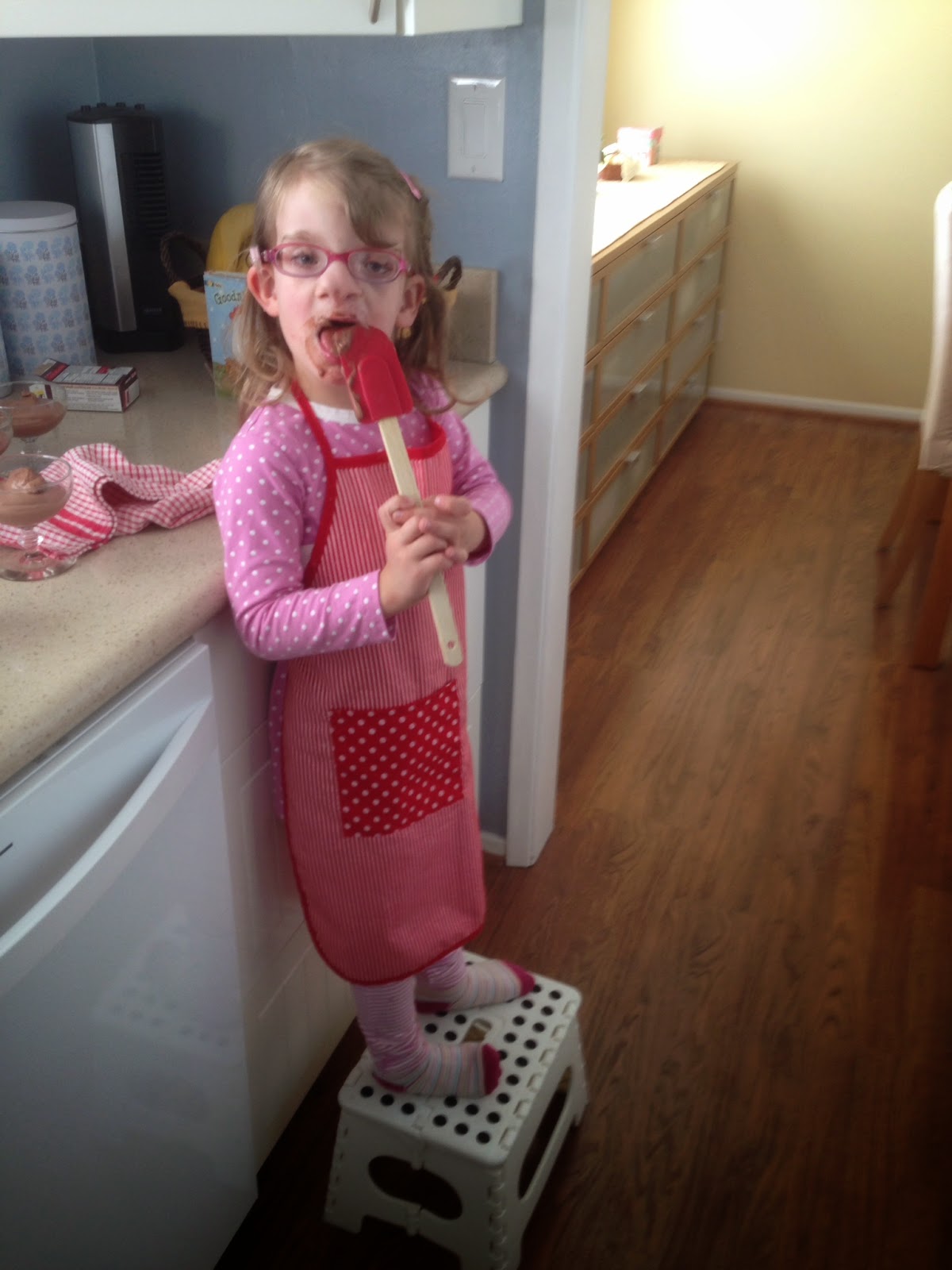 After reading all this I’m sure you are wondering how Amelia’s hearing is progressing and the operative word is “slowly”.  Kristina and DJ recently had the opportunity to get together with two of the other families whose children were implanted at the same time in Italy.  One of the dads commented that he expected their progress to be slow, but not at the “speed of a glacier”!   So we are not alone.  Amelia continues to get speech therapy every week and she is identifying more and more words.   It’s thrilling when she suddenly stops what she is doing to let us know she can hear a bird sing or a door squeak.  She makes lots of noise, but her speech production is still very limited.  Her facial muscles seem to be a bit more pliable, since she now smiles more readily and she can pucker and make kissy noises.  We are hopeful that the latest mapping of her device will help her to begin to hear some of the softer sounds she needs to hear.   Her mappings are now being done on the John Tracy Clinic campus since the House Ear Institute had lost it’s funding for these services.  For us that meant the special FDA approval which was granted for Amelia was also lost and they had to begin the approval process all over again.  It took six months!  Just in time for Amelia to need her next adjustments.  God’s timing is always perfect, isn’t it?