Phew....what a day! We are all exhausted so I'm going to make this quick.


Amelia on the way to the hospital this morning.... 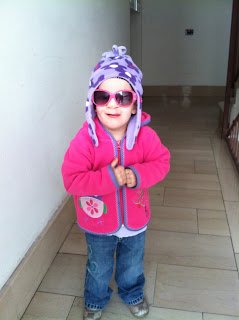 so cute!!
We arrived at the hospital at 7:45 this morning. All 4 families were told to come at the same time (as usual) so Amelia was second in line to get her ABR (or BAER - auditory brainstem response). It is a test performed under sedation where electrodes are placed around her head to measure brain waves in response to various sounds. The test took about 1 hour and Dr Carner told us that she was responding to low levels of sound which makes him very happy because it means she has lots of potential. If it makes him happy, it makes us happy too since he knows what all of that means :). It was almost 1130 by then and he told us to return at 2:30 for her activation.

After a quick lunch at our apartment we tried to relax a little bit before returning to the hospital (didn't really work).   Amelia didn't get a nap which is never a good thing.  She also is getting worse and worse about going to the hospital.  All we have to do is cross the street on the way to the hospital (and away from the park) and she starts crying and tugging to go in the opposite direction.  Activation took about 45 minutes.  There were 2 audiologists in the room as well as a representative from MedEl.  Everyone was incredibly nice and there were many toys in the room to try to keep Amelia entertained.

Her device was hooked up to the computer and they went through the electrodes one by one according to her response in the ABR.  Amelia cried the entire time!  She responded very obviously when the electrodes were activated but usually that just meant crying even louder.   She could hear for the first time!!  It was a crazy mix of emotions for me as I was excited to see her respond but at the same time my heart was breaking while she was crying.  The audiologists payed close attention to Amelia's responses and would turn the volume up and down as necessary.  The device has 12 electrodes and 9 of them were activated (all 12 of them were tested and then the last 3 were turned off).

We took the device off and another MedEl representative went over all of the details of the device (batteries, charging, tiny pins that hold the device together... lots of little details).  It took ~1/2 hr and Amelia cried during that as well (did I mention that she doesn't like the hospital - poor thing - too many shots, IVs and bandage changes).

I can't even imagine how different and scary all of this must have been for her.  Her world is changing! We waited to put her device on again until later at our apartment when dinner was almost over.  We were hoping some dessert might distract her.  She was scared and did not want to wear it at first but she was much calmer than in the hospital.  We left it on for about 20 minutes.  We turned it off but left it on her head and we could immediately tell she noticed a change.  She was very still for a few moments and seemed to be processing her newly acquired sense.  We know she has an insatiable curiosity about the world around her so we are hopeful that leads to an eagerness to learn about sounds as well.

So much for making this quick......... My mind is very full and I have a lot to process so I will leave it at this for now.

Thanks to all of you for supporting us on this journey!
Posted by kristina at 2:45 PM